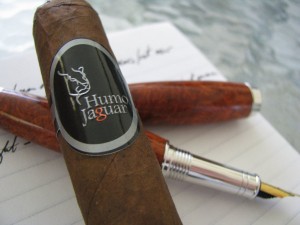 Today, we’re smoking the Humo Jaguar, released in 2011 as the product of a competition held at the Honduran cigar festival by the same name.  Honduran tobacco growers and cigar makers submitted their entries for the competition, and over 200 panelists sampled the blends to select a winner.  This year’s winner was blended by Nestor Plasencia and subsequently released into the marketplace by Miami Cigar & Company in the Fall.  Today’s review is based on a couple of examples, both robustos which have been resting in my humidor since October.  The Humo Jaguar is also available as a Corona Gorda (6X52), and Gigante (6X60).  The blend is, of course, a Honduran puro, and the robusto is available in the Tampa market for about $7.35/each in box quantities of 20.

So, without further ado, on with the review!  The wrapper leaf is quite smooth, and despite a fair amount of chatter about it’s oiliness, my two examples lack any sheen at all.  They are supple, but feel very dry to the touch.  The packaging for the Humo Jaguar calls the wrapper oscuro, but to my eyes they are considerably lighter in color than what I would typically give the name.  The pre-light draw is firm but free, and well within the normal acceptable range.  It produces a sweet hay flavor on the cold draw.  If you happen to be familiar with pipe tobaccos, it actually reminds me of Old Gowrie, a virginia blend by Rattray’s.  In fact, it reminds me quite a bit of Rattray’s virginias’ aroma and flavor while unlit.  It takes fire very well, and lights easily and evenly with no fuss.  The first few minutes of smoking are marked by some spice, and will give a little tickle to the nose upon retrohale.  The initial flavors are leathery and sweet – but with a slight tanginess I find pleasant but fleeting.  As ridiculous as it may sound, throughout the first inch of the cigar I detect an occasional taste that reminds me of tortilla chips, actually. 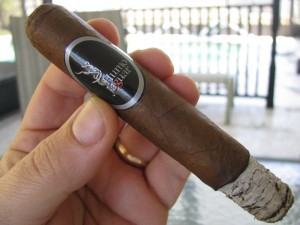 I only remember making this comparison in two other cigars – the early releases of the Shaggy by Gurkha, and an Indian Tabac cigar (I don’t remember the exact blend – my memory isn’t what it used to be) from back in the days before Rocky Patel had become a household name in cigars.  I haven’t had any of his cigars in a very long time, but I have had a few Shaggies and don’t recall coming across this flavor in them for a few years now.  Both of my Humo Jaguars burned at a pretty quick clip, although neither turned harsh nor burned hot.  I just noticed they seem to be relatively short smokes, even for a robusto.

Today’s example ashed itself just past the one inch point, and produces an ash with flaky appearance, yet exceedingly rigid.  The smoke is somewhat drying to the palate, and had me reaching for the water glass regularly throughout the cigar.  I switched to coffee late in the stick, which worked out nicely.  It paired well with just plain, black coffee.  In the second inch of smoking, the earlier sweetness seemed to take a backseat to a charred flavor.  Not charred in the sense of being unpleasant – think of the skin on a roasted marshmallow.  The strength also seems to pick up during this time, but in all honestly the cigar never developed the strength that I had expected.  It remained in the goldilocks zone for me, never brash but always reminding you it’s there.  By the third inch, and into the final stretch, the flavors had subdued considerably.  The leather and hay would pop up on occasion, but both the sticks I smoked carried a woodsy profile during this time.  There was also a periodic waft of a medicinal flavor that would make its presence known, almost reminiscent of some solvent…bu 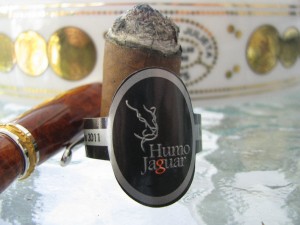 t this would dissipate quickly after a puff or two.  The sweetness came back into play toward the end, although not to the extent as the early portions of the cigar.  The ash seemed to break more unevenly toward the end, but still kept its rigidity throughout.  It tended to break off leaving a jagged edge, rather than cleaving along clean lines.

Admittedly, I have not been a huge fan of Honduran tobacco for some time now, tending to smoke more Nicaraguan cigars (and, as always, a goodly portion of my beloved Fuentes from the Dominican).  I have enjoyed them quite a bit at different times in the past, and probably will again.  While the Humo Jaguar is a good cigar, it isn’t a game changer to me in that respect.  I certainly can see the quality of the blend, it just isn’t my “Holy Grail” of flavor profiles.  However, if you enjoy Honduran tobaccos, I would not shy away from recommending it to you.  The quality of the leaf, as well as the construction and appearance, are superb and certainly worth a try.  It is obviously blended and built from good components, and rolled well.