The EP Carrillo Dark Rituals was originally released to much clamor in 2011 as a Limited Edition, which sold briskly and was suddenly little more than a memory.  It was reproduced as a regular production item for Cigars International earlier this year, although I believe the blend was reworked for the current production.  Craig was kind enough to supply a couple of these for the Half Ashed Episode 109 Cigar of the Week.  The Original Release Dark Rituals carried an Oscuro Maduro wrapper over Ecuador Sumatran binder and Nicaraguan filler.  It was released in a single 6.5”” x 56 vitola with a hefty $15 MSRP.

The coloration on the wrapper is very dark brown with moderate mottling and sparse tooth.  The veins and seams are modest but visible.  Pack density is consistent throughout the cigar’s length, and once clipped provides a near-perfect draw.  The cold draw delivers a slightly sweet – and very “clean” cedar flavor.  The aroma on both wrapper and foot are typical tobacco and perhaps a bit leathery.

The initial puffs drawn from the EP Carrillo Dark Rituals are crisp, like slightly over-cooked caramel.  I find a bit of spice on retrohale; more than I would have expected after almost 4 years, although by some standards restrained.  Within a few minutes, a deliciously chewy sweet leather flavor has developed which is partnered with a mild espresso astringency that I find very entertaining.  The spice remains, but is predominantly found on the retrohale.  Without retrohale, the sweetness is considerably more pronounced.  I do notice in the early moments that smoke production is a bit light when puffed, but seems plentiful when the cigar is resting on the ashtray – almost as if there might be a hole or loose spot in the roll (although I found none). 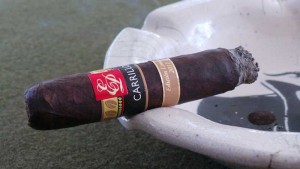 Going into the second inch, the Dark Rituals really begins to mature, showing a depth of flavor that I had not expected.  The sweet, leathery profile has intensified and settled into a comfortable pitch.  There are erratic inclusions of a nebulous citrus flavor that are fleeting but very charming when they show.  I did have some issue with the burn wanting to wander.  This never grew to a point that was catastrophic to the experience, but regular touch ups were required throughout the length of both examples smoked for this review.

As I breach the final third of the EP Carrillo Dark Rituals, the occasional citrus has hit its crescendo and begins to wane.  Ever abhorrent of a vacuum, nature saw fit to replace the citrus with the earlier noted leathery sweetness.  The sweetness has a more prominent role than its earlier counterpart, and the leather takes a back seat.  I did not couple this cigar with coffee, but I imagine it would pair nicely.  The Dark Rituals finishes out with a flourish of dark coffee flavors, which continue to build until the very end.  A lovely cigar.

A word of thanks is due to my Half Ashed co-host for providing the Dark Rituals as a show cigar.  Regretfully, I missed out on this line when they were originally released in 2011.  I must admit I went into first light with some expectation as to what I would find.  I was pleasantly surprised to find much more.  While the original $15 price tag (or current market value if you can even find them?) and present day scarcity might be a deterrent for some, I would highly recommend giving this cigar a try if you ever have the chance.  It is clearly one of the better EP Carrillo blends I have smoked to date.  Highly recommended.