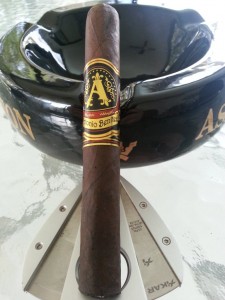 You may remember this post I hastily typed out on my phone and uploaded here back in August while at IPCPR.  It was the middle of the night, and I had just finished up my first Antonio Benitez Edicion Especial Corona (5 X 42).  I was so impressed with the quality of the smoke that I had to put up that brief mention, even in the wee hours of the morning.  Benitez Cigars is the brainchild of Rey Benitez and his father, and they own their own factory which has recently been relocated from Honduras to Managua, Nicaragua.  The Antonio Benitez Edicion Especial is their latest offering, and consists of a Honduran habano maduro wrapper and Nicaraguan habano binder, wound around a filler blend of Nicaraguan, Honduran, and Mexican tobaccos.  I was first introduced to Benitez Cigars at the SOFLATWEETUP at Charmed Leaf back in March of this year, and had occasionally revisited their lineup in the intervening months leading up to IPCPR.  For whatever reason, I had not had the opportunity to try the corona in the line until August.  The Antonio Benitez Edicion Especial corona retails for about $5.80 in the Florida market, and can be found at a growing number of retailers.  Rey himself is a local and regular visitor to Charmed Leaf, and I’ve had the pleasure of spending time with him there as well.  He’s quite knowledgeable and passionate about tobacco and cigars, and is a dedicated family man as well.  If you find yourself in the Delray Beach area, a stop by Charmed Leaf is a must.  But, back to the cigar at hand…

Taking the cigar from its cellophane, the prelight aroma on the wrapper is mild but distinctly woody in nature.  It’s not necessarily a cedar you might normally expect, but woodsy nonetheless – think cypress, or a very faint cedar aroma.  The aroma at the foot is sweeter smelling than the wrapper, has a moderate hay or barnyard character and is slightly peppery.  If you’re prone to such it will even elicit a sneeze with a deep sniff.  The draw is well within my normal preference, giving slight resistance but free and providing a flavor of sweet hay.  With the application of flame and into the first few puffs the Antonio Benitez gives a very bold spice – not at all painful on the back of the throat as some Nicaraguan blends tend to do for me, but felt high on the rear of my palate.  The spice is very strong on the retrohale, even with suitable air dilution.  The early flavors presented come across as toasted grains, and some coffee notes.  In fact, I have taken to pairing this cigar with a good cup of strong black coffee, although today I have no accompaniment. 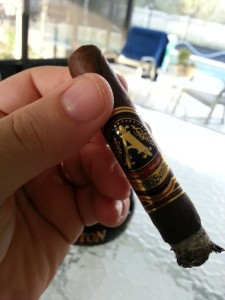 The lit aroma of the Antonio Benitez is a very classic cigar fragrance.  It reminds me of charred wood, and can even take on a resemblance to brewing coffee.  This is a strong association for me personally, and this cigar actually generates a desire to match it up with a good cup.  In this early portion of the smoke, I took a moment to examine the construction of the stick.  It is very well made as I have come to expect based on previous examples.  It has a near-uniform dark chocolate colored wrapper, and almost imperceptible seams.  The caps are beautifully applied as well, and I find neither void nor soft/loose spots in the roll.  The ash first drops just shy of one inch.

Going into 2nd inch, the flavors have gotten more cedary in character.  There is still a quite pronounced spice through the nose with retrohale. The burn is behaving as expected in a well made cigar.  In this particular stick, I did perform one minor touchup during the 2nd inch.  However, it probably would have self-corrected; I’m somewhat compulsive about nipping things in the bud when possible.  I continue to experience flavors similar to a generic toasted grain and some coffee coupled with the cedar that has come into play.  I mentioned that during the cigar smoked for the pictures and writing up this review, I experimented with no coffee to make sure that the coffee wasn’t influencing my perception of the cigar.  The coffee flavors might not have been as bold in this case, but still quite clear.

By the final stretch, today’s cigar sweetens slightly, with a dry cocoa flavor accompanying the coffee that has persisted throughout.  The spice is not quite as prevalent by this point, either.  As expected, the Antonio Benitez Edicion Especial corona lives very much up to my earlier comments concerning construction.  The draw and burn has remained steady and even throughout, with only the one minor touchup along the way.  It carries a long, pleasant finish that lingers on the palate.  The finish retains some of the sweetness that has developed, along with some smokiness and hints of roasted almonds. 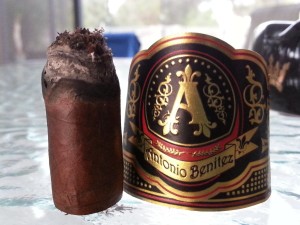 As I mentioned, I have enjoyed some of Rey’s cigars going back to my first introduction to them at the SOFLATWEETUP, but the Edicion Especial corona is far and away my favorite.  I loved this blend in this size from first light at IPCPR, and continue to do so.  With all the reviews and ratings that float around the internet these days, I think the real issue at hand is whether or not a cigar is worth buying…and buying again.  In this case it certainly is for me.  Would I spend my money on them?  Not only would I, but I have, and will continue.  There has already been a number of retailers to pick up the Antonio Benitez line, so look for them at your local shop – or better yet ask for them if you don’t see them.  If you’re into bold Nicaraguan tobacco that will wreck neither your bank account nor your palate, this one is a sure winner.  Having spent a great deal of time in South Florida for my job this Summer, I buy mine at Charmed Leaf [NOTE: This shop has sold since this original post. I’m not familiar with the current ownership nor condition of the place.].  If you can’t find these cigars locally, I can highly recommend ordering there (for full disclosure, that’s just a recommendation from a very satisfied customer – no business affiliation).