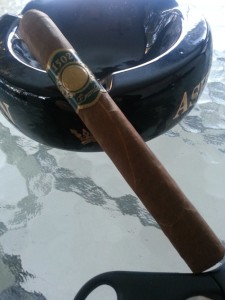 As you may recall, I recently did a Cigar Spotlight on Emilio Cigars in which I mentioned the fact that Emilio has taken over distribution for a number of other boutique cigar companies.  One such company is 1502 (Global Premium Cigars).  Gary Griffith was kind enough to pass along a couple of 1502 cigars for me to try, one of which I’d like to present today – the 1502 Emerald.  I believe this is the first 1502 I have been fortunate to smoke, as I don’t know of any retailers from whom I usually buy that carries the line.  Three lines make up the 1502 marque: “1502 Emerald the “Fina Fuerte” (Fine Strong), 1502 Ruby of medium strength and 1502 Black Gold with strongest character” [from the GPC website].  My understanding from the GPC description is that the Emerald carries a Nicaraguan Corojo Habano wrapper, and a mixture of San Andres (Mexican), Esteli (Nicaragua), and Condega (Nicaragua) leaf in the filler and binder.

You’ll have to forgive the poorly lit pictures in today’s review, as I made these notes on the final Emerald that I had onhand – at dusk – and I possess very little photographic expertise.  In checking out the outward appearance of the Emerald, I find a uniformly chocolate-colored wrapper with moderate veins.  The veins are noticeably lighter in color than the areole, which makes them stand out brightly.  As for construction, the seams are tight and well formed, as is the cap.  Insofar as is observable, the Emerald is a very attractively built cigar.  Today’s example is approximately 6″ long and roughly a 48 ring – it is mildly square-pressed, so I suppose an exact ring measurement may vary depending on what you might consider the “proper” method.  The prelight aroma is mild – almost nonexistent on the wrapper, and faintly akin to hay or a sweet barnyard from the foot.  The foot is slightly overwrapped as well.  The draw before lighting is dark and sweet; somewhat like raisin with a bit of nuttiness, and deliberate but free. 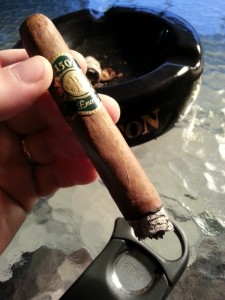 With the application of fire, the Emerald takes a light readily.  The initial puffs are surprisingly floral, and the early retrohale is lightly peppery and somewhat astringent; think white pepper rather than black or vegetal.  The spice is well within the pleasant range for me – not overpowering in the least.  The astringency sticks around throughout the first inch or so of the cigar, as do the above-mentioned flavors.  The burn proves to be reliable, with only a slight wobble within the first few minutes, which soon self corrects.  After the first inch of smoking, at about 1.25″, an unexpected sweetness developed in both examples I smoked.  I found this very pleasing on the palate.  The spice remains upon retrohale, but is complemented well by this sweetness.  For the life of me, I’m failing as a cigar reviewer…I can not attach a specific flavor assignment to it.  With both cigars, I caught myself overpuffing just to try and get a better grasp of what I might call it, and having to purposefully slow down.  I have to admit the Emerald performed well, and never gave even a hint of harshness with the abuse.  I simply reigned myself in to avoid rushing the smoke and/or getting lightheaded from a nicotine rush.  In the end, I still can not put a finger on what would effectively communicate the sweet flavor, except to say that it was very attention grabbing.  If pressed, I might cede a very, VERY faint butterscotch note.  I would be reluctant to even do that – I am not a fan of butterscotch by any means, yet I found it quite intriguing and pleasant.  The burn remained essentially maintenance-free, with only a rare touchup.  In the final stretch, the sweetness did fade considerably, taking a back seat to the nutty flavors and becoming more polished.  The flavor quality is still there, just somewhat more sedate. 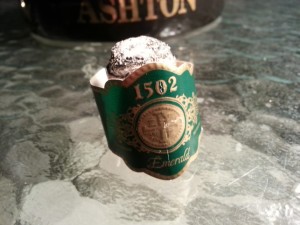 I found the 1502 Emerald entirely enjoyable, and would not hesitate in the least to keep them around once my regular retailer(s) pick up the line.  Judging by the sheer volume of “New Retailer” posts coming from the folks at Emilio, this should be in the very near future.  My opinion means very little in the grand scheme of things, but I think Gary Griffith’s move into distribution of such gems as these is brilliant.  In every instance that I’ve had to try the lines he has picked up, I have found great cigars that complement his own offerings.  The exposure for some brands I might never have otherwise heard of is win-win-win in my book.  Growth for Emilio, exposure and growth for the lines he distributes, and more variety and availability of some great cigars for us enthusiasts!  It just doesn’t get any better than that…