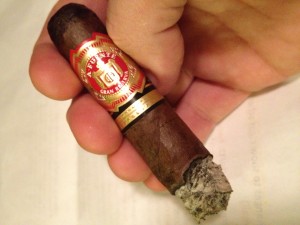 [EDITOR’S NOTE: This is the featured cigar for our inaugural episode of Half Ashed.  I also reviewed this cigar in the early days of The Cigarmy.  You can find that review here.]

Hello cyber cigar world. Over the next however many episodes of the Half Ashed Cigar Podcast we’ll be accompanying our weekly episodes with a written review of the featured cigar. You’ll quickly realize that I have no format, no form, no skill really, just the uninhibited passion of a man and his love for cigars. You’ll quickly realize to listen to what I mean rather than hearing what I say. I’m sure I’ll open a few eyes and perhaps even teach you a thing or two. Most of all I think you’ll enjoy the ride that we’ll be on together.

The idea of an accompanying review is to point out that there is a difference between a cigar you smoke and one that you review. On the show we’ll be furiously trying our best to sound entertaining and it’s quite possible that the cigar itself will just be smoked. These epilogue submissions not only help paint a clearer picture of what the cigar brings to the table, but really (to me at least) are meant to emphasize that smoking one cigar alone does not constitute an adequate qualification for a review. To know what the cigar really means to convey, you must smoke multiple samples. Hopefully, you can smoke many of them, from multiple boxes and different releases. Only then can you claim to start knowing what that cigar intends to provide. While Kip and I are only smoking 2 or 3 specimens on a weekly basis, the first year of our reviews is at least half dedicated to cigars we know and love already. Thus qualifying us to provide a review that can stand for more than just a one-off opinion.

In the case of our inaugural review, Kip and I are smoking the Arturo Fuente 858 Sungrown; Kip’s suggestion. One final bit of pertinent background information follows. Each week that we review one of our own “favorites”, one of us will be new(er) to the cigar and the other will be the expert. Since this is Kip’s recommendation (and a mighty fine one it is), I’ll be providing the supplemental review to expand upon his sage words of expertise. Sit back, relax and get ready to have your mind blown. When Kip Fisher puts his fingers to the keyboard, we’re all in for a treat. He is a master of the written review, and if we’re lucky, he’ll knock his live reviews on-air out of the park, too. Without further ado, my thoughts on the 858

Right after lighting this cigar has the sweet baking spice I love from Fuente. Dominican tobacco can provide a depth of flavor that rivals anywhere else in the world, to my palate. This 858 is a prime example. Deep richness and a slight syrup-like sweetness are immediately present. Upon opening up, the sweetness drops an octave and brings the dried fruit depth of flavor in spades. I think dried sour cherry and mint emerge as the first third gracefully exits. There’s an obvious tannic void which reminds me more and more of something that’s obvious, solely by not being there. Imagine a slice of pizza that you’ve sopped all the grease from. It’s still pizza but you know there’s something missing. The void is almost always accompanied by a shortness on the palate of a certain flavor. It’s there and then immediately it’s gone. For some reason I love this in a cigar. It must be a mental thing after having aged enough cigars throughout the years to know that it’s a sign of good things to come. This cigar has the new(er) Fuente band on it which means its post 2011 (Kip, correct me on that date). I can’t help but think that a SG from early winter 2008 would be pretty epic right about now.

Fuente has a typical flavor I usually can spot in their cigars. A friend of mine says he can always taste a vegetal type flavor in anything Kelner blends and I can say the same for what is arguably the most well-respected premium cigar brand in the US. I don’t know quite what I always taste in Fuentes but it’s there. Maybe throughout the lifetime of this show I’ll figure it out. Let’s call it homework…

The 858 is smoking like a dream; moderate tempo, proper draw, cool temperature, good burn, all the hallmarks of a great cigar. Admittedly, I don’t think I’m rewriting history with those statements but it should be noted that this cigar does not receive poor marks for those items which typically only hurt a cigar. Into the final third the performance continues to be strong and the flavors continue to develop. The sweetness now is brighter and resembles an apricot. It seems to have lined up, or melded with the tannic nature. I think the short finish and crisp nature of the flavor point to that.

Finishing up, I’m amazed at how the flavors transition in this cigar. I expect it to be richer, more tobacco centered and even slightly dark. The fact that it transitions into “softer” flavors, crisp and tannic in nature is art at its finest. But that’s the thing about blending tobacco, it’s never just art. It is such a skillful thing. Man, I love it.

My name is Craig Schneider and I am what you’d call the “color” commentator of our show.If I sound vaguely familiar or if my drawn out rants have put you to sleep in the past, it was likely during an episode of Dogwatch Cigar Radio where I guest hosted on over 75 occasions.
I am a sustainable home builder and architect by day and an infatuated husband and father by night. I love my life. I love my wife. And I’m happy to be here with you all. I prefer my cigars aged and their profile to be slightly sweet and bready.I’ve smoked probably 50 perfect cigars in my life and I hope that every next one I light up will be the 51st. There’s nothing quite like it.

Latest posts by Craig (see all)