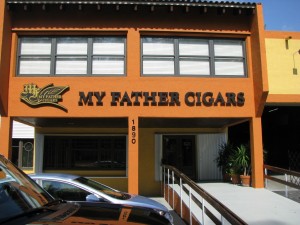 NOTE: If you want to skip the narrative and go straight to the pictures, you can find them HERE

This past week, my nephew came down to visit for our 4th annual Cigar Week.  Each year, I take a week off work when he comes down from Tennessee, and we putter around the state of Florida visiting a number of cigar shops, manufacturers, or any other events that happen to be going on at the time.  This year, we managed to work in a visit to Delray Beach, Miami/Little Havana, Ybor City, and a few places around Tampa.  On our way down to Miami, we stopped and spent an evening at Charmed Leaf with Frank and Elissa.  This was the third time I’ve had the pleasure of visiting The Charmed Leaf, and I’m totally enamored with the whole operation.  The focus of The Charmed Leaf is very much on boutique cigars, of which they have a great selection – including many I don’t typically have access to in the Tampa market.  The atmosphere of the place is very lighthearted, friendly, and welcoming.  We even got schooled in playing dominoes while we were there on this trip, which was great fun.  I got so carried away with the cigars and fun that I managed not to get any pictures while we were there – which will be corrected the next time I’m in the area.  With permission, I’d love to feature them in an upcoming series of posts I’m planning to spotlight tobacconists’ I’ve encountered and have a great deal of respect and appreciation for.  If you’re ever in the Delray Beach area, the trip won’t be complete without a stop there.  I highly recommend them.  And, if you’re not in the area, you can always check out their website as well…you just can’t get a domino lesson online [EDIT: This shop has since sold to new ownership.]. 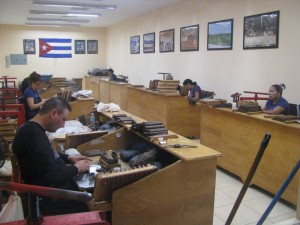 The following morning, we continued down the coast to Miami and into Doral to visit the My Father factory, lounge, and distribution/offices.  I had contacted them ahead of time, and John Gonzalez was kind enough to give us a short tour of the operation.  Much of the space at the new site is dedicated to warehouse and distribution efforts, but they have a lounge and a working factory as well.  The lounge stocks My Father products, and is quite comfortable and very nicely furnished.  There were 8-10 torcedores at work while we were there, busily rolling cigars, and several folks working in packaging/shipping/receiving.  Much of their product is now manufactured in Nicaragua, but the Miami factory still produces a few cigar lines, some of which I find quite tasty. 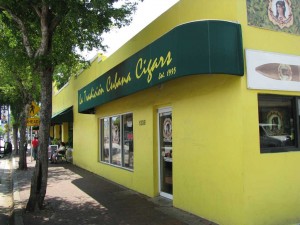 From My Father, we headed over to Calle Ocho for a quick run through Little Havana.  We passed through/by/in/around a number of shops and factories, but the highlight of the visit was a stop at La Tradicion Cubana.  Frank Herrera had recommended we visit LTC, and it proved to be a wonderful experience.  We hung out there with Luis Sanchez, the proprietor, for a couple of hours just smoking cigars and chatting.  This was the first time I had the chance to spend any time with Luis, and I found him to be a very cordial, welcoming facet of Little Havana.  I highly recommend a stop if you’re ever in Miami.  It’s definitely worthwhile – both for the conversation and the cigars.  I smoked one of his LTC “Palmitas” while there, and it was spectacular.  Since the visit, I have enjoyed the Jameson cigars he makes for Brad Mayo as well.  I foresee me stocking a few of these makes in my regular rotation for sure.  Luis is responsible for his own brand (La Tradicion Cubana & Sabor Cubano), as well as Jameson Cigars (including the Red Label, Black, the Southbound Series, and Santos de Miami), Casa Gomez, and La Caridad del Cobre.  We spent most of the afternoon on Calle Ocho, then headed back to points northward. 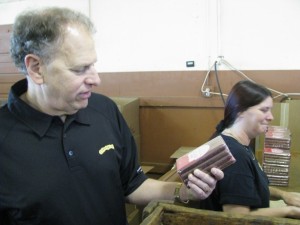 On Thursday, we had a scheduled tour of the JC Newman factory in Tampa.  When we arrived at our appointed time, we were pleasantly surprised to learn that Eric Newman himself was in town and would give us the grand tour.  Most of the work going on here is in machine rolled cigars and distribution.  The building has been renovated in recent years, and is a spectacular sight.  It has been restored to its past glory, and is such a fun way to spend the morning.  The equipment is impressive as well…each of the rolling machines is capable of producing up to 5,000 cigars per day, and has several thousand moving parts.  But, the highlight of this tour was having Eric give it.  The family stories and proud history of the Newman family’s 117 years in the industry were fascinating.  Eric gave us the entire history of the Newman family’s involvement in the cigar industry…from it’s beginnings in late 19th century Ohio, through the Tampa years, the partnership with the Fuentes, and into current times with the Cigar Family Charitable Foundation and opening of their new Nicaraguan factory.  It’s a wonderful story and if you ever have the chance you should visit – even if not for a tour, they maintain a small museum on the first floor of the tower detailing this history.

We finished out the week with some local stops around Tampa – Ybor City, fishing at the Skyway, and some stops at various brick & mortar cigar shops.  We visited Tampa Humidor, The Cigar Castle, and Clearwater Cigar Company.  Tampa Humidor is my local “go-to” shop.  The majority of my cigar buying is from them.  I had been to Cigar Castle a couple of years ago, but not recently as it’s a bit out of my normal driving patterns.  They have a very nice lounge, and great selection of cigars.  Atul was incredibly friendly and helpful as well.  Definitely worth a stop when in Tampa.  The other tobacconist that we tried for the first time was Clearwater Cigar Company.  They are near the St. Petersburg airport, from whence my nephew was departing.  John Fought, one of our previous giveaway winners, recommended this stop because of its proximity to the airport, and it is one of his hangouts as well.  So, we met John in person for the first time here. This is a newer shop (less than 2 years), run by Leglio Sotolongo.  I’m not commonly in that part of town, so I had never made it over that way.  As has become a pattern in the cigar industry, we encountered nothing but a friendly atmosphere here.  Leglio is a very upbeat, positive, laidback kind of guy.  A perfect fit for the tobacconist trade.  He helped us out in picking some cigars we had not tried before based on what we typically like to smoke, and together with John provided an entertaining afternoon while we waited to head over to the airport.  Some or all of these locations will likely be featured in the upcoming spotlight series as well.  Thus ended this year’s Cigar Week.  If you all ever make your way to Florida, I don’t think you can go wrong at any of the sites we hit this week.  Also, if you’re in Florida and have a favorite spot let me know.  I travel most of this state, and I’m always in the market for meeting new folks in the field…and I spend a lot of time in cigar shop lounges…