As part of the continuing celebration of 50 years making cigars, Sosa Cigars (Antillian Cigar Corporation) has announced the revival of the Santa Julia brand.  The company has previously brought back other older brands from their portfolio with the re-introduction of Imperio Cubano Miami and Macabi USA.

The name “Santa Julia” is taken from the Sosa family farm in Taguasco, Cuba.  Don Juan Sosa and son Arturo bought the farm, which spanned more than 900 acres of land, in the 1920’s.  They produced sun grown leaf used as binder and filler components.  Sosa family members and local tobacco workers maintained the land until it was lost to the Cuban government during the revolution. 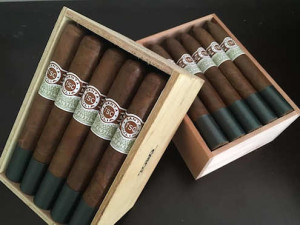 Arby Sosa wanted to bring back the brand to celebrate the Sosa family’s’ longevity and consistency in the industry.  Interestingly, the line is being made at La Vega Cubana in Clearwater, Florida.  The wrapper is Ecuador Habano Oscuro, the binder Honduran and the filler blend is comprised of Dominican and Nicaraguan (Condega) tobacco.  Only two vitolas will be produced – a Torpedo (6.5″ x 52) and Toro (6″ x 50).  Production is capped at 20,000 total cigars.  The first release will come in January 2016, with the remainder being released throughout the rest of the year.  MSRP has been set at $9.90 for the Torpedo and $9.60 for the Toro.

Antillian Cigar Corporation is the manufacturer of the popular brands of Sosa Classic, 60 by Sosa, Imperio Cubano and Macabi. The Sosa family has been in the cigar business for 4 generations, more than 70 years. The Sosa cigar tradition began at the turn of the 19th century with Don Juan Sosa, a small tobacco grower in the fertile Taguasco region of Cuba. By the 1920’s, that farm was one of the largest tobacco-producing haciendas in Cuba. Over the next 30 years, Don Juan’s son, Arturo, and grandson, Juan, continued growing and selling their tobacco. Exiled from their homeland in Cuba in 1962, the Sosa family opened their first U.S. store in 1964 in Miami, FL. The Sosa’s currently have 2 stores in Florida, including the shop in Downtown Disney. They have their line of cigars in 300 stores across the country. Today, the legacy of quality, handmade cigars made in the Cuban tradition continues with master blender, Juan B. Sosa, alongside his wife, sons and nephews.